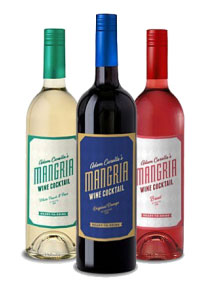 Adam Carolla came on The Drive with Steve Jaxon yesterday, to talk about his wine cocktail brand Mangria, ahead of his appearance at the Uptown Theater in Napa, where he would be performing and doing a live podcast. Steve asked him to explain how he came up with Mangria.

“The way I invented it was, I wanted to get drunk. I was standing in my kitchen and it was like a Friday night and I had been working a lot and traveling a lot and really happy to be home on a Friday night… I was in my bathrobe and I was drinking a little red wine and I had almost no red wine left. So I though, well, how am I going to catch a buzz on almost no red wine? And I dumped a little vodka into my red wine glass and I realized it tastes like ass and now I’ve ruined my vodka and ruined my red wine. Then I thought to myself, I wonder how I can save this? So I put a little orange juice in there, and I put some ice in there and I stirred it around, and I said, excelsior, this tastes awesome. And I’d invented something called Mangria. Then I started making it in mason jars and bringing it to barbeques and stuff. Somebody out of Napa said, hey, if you want to make Mangria, I can make it for you, and the next thing you know, I was designing the label.”

Steve asked how it compares to Sangria. “The thing about Sangria is, you take wine and you water it down with a bunch of fruit stuff. This is basically taking wine and turbo charging it. So instead of taking the alcohol down with a bunch of fruit stuff, you take it up with spirits, it’s actually brandy that’s mixed with it. It’s all grape based and it’s 21% alcohol.”