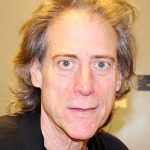 Comedian Richard Lewis joined Steve Jaxon on The Drive today. Here is the audio of his interview. He will be performing on December 2 and 3, at Cobb’s in San Francisco. He is currently on Curb Your Enthusiasm. To keep up with Richard Lewis, visit his Twitter page: https://twitter.com/therichardlewis

They begin by discussing the current news about famous men including comedy performers, being accused of sexual harassment, and Richard Lewis says that he tends to prefer to avoid those subjects on stage, in favor of entertaining his audience by telling jokes about himself.

He tells about knowing Larry David since they were born at the same time and place. They only learned about the birth coincidence recently. But they were athletic rivals in their early teens at summer camp. Then he became a comedian and Larry was hanging around the night club. They became fast friends then and have been ever since. He goes on to tell stories about working with him. Later he describes the time when he was recovering from a fall, he remembers having been friends with the greatest comedians of the century. He was impressed with how hard he worked and how much success he had so early, This has made him more relaxed as a performer, finally feeling good about himself.