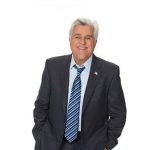 Jay Leno joined Steve Jaxon on The Drive today, in preparation for his performance this coming Saturday at the Uptown Theater in Napa, CA.

Steve introduces Jay as “…a young comedian who if he keeps up this pace and works hard, I think he’s going to be famous some day. You may have heard of him, his name is…  Jay Leno.”

Steve says that when Jay Leno appeared on David Letterman’s NBC show, those were to him some of the funniest moments on TV he’s ever seen. Jay says that he was in awe of Johnny Carson and more at ease with his contemporary Letterman.

Steve mentions seeing Jay in the mid-80s when Jay would come out on stage on a motorcycle. He continues to perform as a stand-up comedian, doing about 210 dates a year. He says that he was always a stand-up, who got lucky and got a TV show, but the art of doing stand-up comedy is his favorite.

He was also on the road while he was still on TV. It was a good way to stay close to what the audience thought was funny, because in TV, the audience is prompted with applause lights and cues to laugh. Steve remembers how the transition happened with Conan O’Brien and Jay tells how it went, in a nutshell. He also tells about how he first got on the Johnny Carson show. Carson gave him some good advice about telling jokes and testing them with audiences. He even suggested reading a joke off a 3×5 card, as boring as he could, and if it got a laugh, you had a good joke. He was a regular substitute host for Carson for a long time.  At 8:53 of the track displayed above, Steve plays about a minute of the audio from Jay Leno’s first appearance on The Tonight Show with Johnny Carson in 1977.

He talks about having done a lot of comedy gigs where he was not the headliner. For example, opening for Tom Jones. When you reach a point where people come to see YOU, it’s nice. And it’s nice to be able to just write a joke and test it out on the audience. This reminds Steve about an Albert Brooks story where he’s opening for Ritchie Havens. The crown was chanting “Ritchie Ritchie!” and the stage hand turned to Brooks and asked, “Is your name Ritchie?” Brooks replied, “No.” “They’re gonna kill you!” said the stage hand.