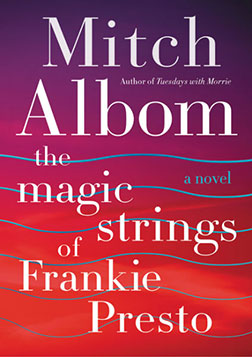 The cover of Mitch Albom’s new novel, The Magic Strings of Frankie Presto.

Yesterday’s edition of The Drive featured a Steve Jaxon interview with best-selling author Mitch Albom. It was an interesting conversation and a great example of how The Drive covers subjects that are of national as well as local interest, since Albom is appearing in Santa Rosa later this week on the promotional tour for his new novel, The Magic Strings of Frankie Presto.

As the conversation began, they talked about their love of music and how both of them once had ambitions as musicians. At first, Steve asked Mitch to describe the band he occasionally plays in. “It was about twenty-something years ago that an escort up in your area there named Cathy Goldmark, put together a bunch of authors who she had been driving around, who had told her that when they were younger they played in a band. And eventually she put together a jam, the jam led to a larger band and we’ve been together ever since… We play old rock and roll and we raise money for literacy… It’s mostly for fun. My background is in music, originally, so myself and a couple other guys in the band can at least handle a few chords and we try to hold up the rest of the band.”

When Steve asked him to explain the name of the band, The Rock Bottom Remainders, he replied, “In the book world, you know, when you get discounted, they cut the book down from $20 to 10, and 10 to 7, and 7 to 4, then eventually they throw you into the bin where they’re all but giving it away, and they call that the rock bottom remainders, where they’re just trying to get rid of the stock, in a book store that will be the cheapest priced thing you can get, and that’s about the monetary equivalent of our music.”

[soundcloud url=”https://api.soundcloud.com/tracks/235767473″ params=”auto_play=false&hide_related=false&show_comments=true&show_user=true&show_reposts=false” width=”100%” height=”144″ iframe=”true” /]
Before getting into the stories of his more recent books, Steve asked for the story of the blockbuster best-seller Tuesdays with Morrie: “Well… I happened to see an old college professor of mine on television talking about what it was like to die from Lou Gherig’s disease. I had lost touch with him as I had become very ambitious and I didn’t have time for that kind of thing in my life, at that point in my life. I called him up and he kind of convinced me to come see him, I went to see him, one visit led to another and another and another, and I ended up seeing him every Tuesday for all the Tuesdays he had left in his life, which was about seven or eight months. I wrote a book to pay his medical bills, which was based on the conversations that we had during those visits. And every week, we sort of took on a different topic seen through the prism of, what do you understand about your life once you really know you’re going to die, as he did.” He went on to tell how the book’s success changed his life.

Steve then asked about “The Five People You Meet In Heaven,” which he mentioned is the most successful hardcover first adult novel ever. Mitch replied, “Yeah, I was very lucky with that, because it’s not often that you can make that switch from non-fiction to fiction, but I sort of knew that after Morrie, and it had been 6 years since Tuesdays with Morrie had come out, that anything I wrote non-fiction was just going to be held up against that. ‘Ah, well, it’s not Morrie, it’s not that good…’ I didn’t want to do that to myself and I didn’t want to do it to whatever subject I would have chosen. And so I decided to just go the total opposite route, and write a novel, and while I was at it, write a novel about heaven and amusement parks, and things I knew very little about.”

Both men are from Detroit and they shared stories about their early experiences in radio in Detroit and their love of The Detroit Free Press. Albom mentioned that he still does a daily talk show on WJR in Detroit and said, “I’m still there largely because of that same feeling of tradition in Detroit, which I’m very proud to call my home.”

He then explained how he arrived at the story of his new novel: “You know… I was going to be a musician also and that was going to be my goal, that was my dream. And I tried it and I lived in New York, and banged on doors, and it didn’t work out for me. And while it wasn’t working out for me during the day, I volunteered for a local newspaper, for free, and found that I had some aptitude in that, and sort of shifted over to writing. And as much as I love music and still do, my gift is probably more in the area of writing.

“This new book, The Magic Strings of Frankie Presto, is sort of based on that concept, that everybody has a talent, a particular talent, that can influence other people’s lives. In this case, it’s the story of a musician, a guitar player, who is like the greatest guitar player to ever walk the earth. He is so gifted and he suffers to much in his young life that he gets this guitar when he is 9 years old and he has these magic strings that he can play over the course of his life. And when he really needs to, he can actually change somebody else’s life with his playing. And when he does it, the strings turn blue, then it’s used up and it’s gone… And while there’s a whole story to it, obviously, with an entertaining plot and all that, the metaphor is that everybody has a talent that affects other people. Yours obviously lay in radio, although you thought it was going to be in music, but with your voice, I don’t see how you could do anything else. And mine was obviously meant to be in writing. And other people’s in other areas and they’re not always entertainment things. Sometimes your talent is in teaching, or in nursing or being an electrician. But if you are true to your gift, you can really affect other people’s lives. And it’s for us to sort of accept what our gifts are.

“Because while Frankie Presto is fictional, the backdrop of the book is very much like Forrest Gump or Zelig, he moves through everything that’s real, so he’s in Duke Ellington’s band when he’s a kid, and he meets Hank Williams and sells him a car, and he’s with Little Richard in the studio and he’s Elvis Presley’s backup guitar player and one night he takes over for Elvis when Elvis can’t make a show and nobody knows it’s not Elvis because he looks like him and sounds like him. He becomes the world’s first Elvis Presley impersonator, and he goes to Woodstock.

“I mean, all the people, including real musicians, actually participated in the book, from Tony Bennett to Burt Bacharach, to Darlene Love to Lyle Lovett, Wynton Marsalis, Roger McQuinn… they’re all in the book, they’re friends of mine that I’ve known over the years, and they let me write as them for a few pages, when they come to Frankie’s funeral, which is where the book actually takes place, and they look back on his life, and each of them has a memory of when Frankie Presto was with them… So it’s all part of that spirit of music that we celebrate together.”

For more about The Drive, visit its page on this site.