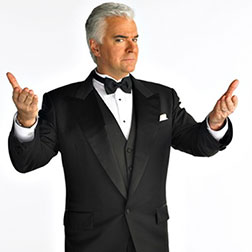 John O’Hurley, A Man With Standards.

Yesterday Steve Jaxon had the pleasure of interviewing actor and singer John O’Hurley on The Drive, and talking about O’Hurley’s one-man show A Man with Standards, which he is performing this weekend at the Hotel Nico in San Francisco.

In just a few minutes of impromptu conversation, Jaxon had his guest telling all about himself, from his background as a classically trained singer, to his role as J. Peterman on Seinfeld, to the music of the great American songbook and the rebirth of supper clubs in big cities around the country.

The interview began with John O’Hurley revealing the story of his early musical training, saying, “I don’t remember a time when I didn’t sing. It just came very naturally to me… It wasn’t until college, the head of the music program said, ‘I hear a voice in there and I’m going to drag it kicking and screaming out of you.’ And I went back to study classically.”

When Steve asked about the show “A Man with Standards” we learned what O’Hurley means by standards: “I talk about the standards of the great American song book, as well as the idea of standards being manners. Back in the ’40s the ’50s and the ’60s they were indistinguishable and went along with each other, a sense of style and swing.”

When Jaxon mentioned being a fan of Seinfeld and of O’Hurley’s character J. Peterman, O’Hurley mentioned that he is now an investor in the company and talked about how much fun it was to play Peterman: “…they just wanted him to sound the way the catalog was written. And over the character arc of the four seasons that I was on Seinfeld, he became kind of a corporate Mr. Magoo, he was a bit of a raving lunatic, and more and more fun every time I did it. They enjoyed writing for him, I think.”

Jaxon mentioned what a great room he will be performing in, the Michael Feinstein room at the Hotel Nico in San Francisco. For O’Hurley, beside being a great performing space, it represents something more: “This is an idea that’s coming back now. You see it happening in New York, you see it happening now in Los Angeles and Chicago, the concept of a supper club, where you go and someone comes in and does an evening of great music, that you sit down and listen to. They tell you a story, while they’re singing. It’s a wonderful wonderful idea, that disappeared for so many years, kind of like ballroom dancing, come to think of it. It’s all been discovered again and I’m glad so see it.”