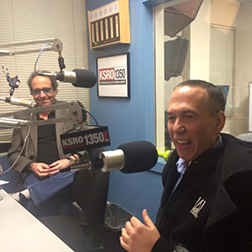 Steve Jaxon and Gilbert Gottfried on The Drive.

Gilbert Gottfried, in Santa Rosa yesterday afternoon for a performance later in the evening, walked into the The Drive’s refrigerated radio studio for an interview and in a few seconds had everyone laughing about Steve Jaxon’s preferred cold studio temperature. Then Steve began by asking Gilbert about his origins in comedy and we learned that he started doing stand-up as a kid and found success despite the odds being stacked against anyone seeking a career in entertainment.

Gottfried recalled his time on SNL, which was right after the original cast left, which was a hard act to follow and the critics were merciless. “It would be like if in the middle of Beatlemania, you said John, Paul, George and Ringo are gone and we’ve got these other four schmucks, and just pretend that they’re the Beatles… Even before we were on the air they were already panning us, saying, how dare they continue the show…”

Gabe Moline, also visiting The Drive, asked for the story of how the SNL writers made him play dead in a sketch, and Gilbert told, “To show how much they hated me, there was a funeral sketch, and rather than just put a mannequin in it, they put me in the coffin. Yeah, so they couldn’t stand me.” Gabe mentioned that Gilbert is friends with Norm Macdonald and he said, “He may have had a miserable time (on SNL) but his season was more respected, I think,” followed by a spot-on impression of his friend.

When Steve asked about what kind of work he has been doing, we heard about Gilbert Gottfried’s Amazing Colossal Podcast, on www.gilbertgottfried.com. “Right this week is Chevy Chase and I think next week is Artie Lange.”

Jim Murphy (operations manager and head of programming for KSRO) joined the group and brought a photo of him with Gottfried and others which elicited some memories and stories.

Then Gabe brought up Gilbert’s special called Dirty Jokes, and the fact that since they are on the radio they are subject to FCC rules so they could not tell any: “But what I love about your dirty jokes and your clean jokes is the economy of them. There’s a great joke where the punch line is, the wife says, ‘Stop trying to put words in my mouth.’ But maybe the one that we can recall on the air is the patient that goes to the doctor and the doctor says, I’ve got bad news for you, you’ve got cancer and you have Alzheimer’s. And the patient says…” After a perfect pause, Gilbert finished it with, “Thank God I don’t have cancer!” 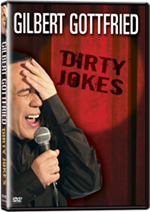 Gilbert suggested, “Let me try to say punch lines of filthy jokes that are clean punch lines.” And Steve remembered, “You know we used to do this! Give us your favorite punch line to a dirty joke and we’d do it on the air, on other radio stations.” Gilbert was ready with a few: “Oh, here’s one: ‘That’s it, I’m calling the police!’ Or, ‘OK, OK, I’ll do the dishes!”

Gabe asked, “What I wonder about, is this a practice of yours, do you try to make jokes as short and economical as possible?” Gilbert answered, “No, sometimes, I stretch out bits to the breaking point,” and that led to the story of the famous post-911 performance where Gilbert ended his monologue with the Aristocrats joke.

“It was shortly after, just a couple of days, and it was in New York and it was like, just a weird feeling around the planet, let alone just being there in New York. So I figured I wanted to be the first one to make some bad taste… I wanted to go further, and just break the ice here. And I said, ‘I have to leave early tonight. I have to fly to LA. I couldn’t get a direct flight, we have to make a stop at the Empire State Building.’ And people were booing and hissing and gasping and one guy yelled out, ‘Too soon,’ which I thought meant I didn’t take a long enough pause between the setup and the punch line… If you had told me at that point I was on stage for 200 years, I would believe you. And then I figured that I can’t lose them any further, and I go into The Aristocrats, and that’s all incest and bestiality, and they were howling and applauding and cheering and stamping their feet. And so it means, that terrorist attack, bad taste, incest and bestiality, good taste!” Gabe added, “Thanks for being the first person to make a joke about that because I think humor healed us a lot, post 9-11.”

So the interview ended, after everyone had walked close to the edge of what they can say on the radio, without anybody falling off the FCC’s cliff.