Dick Cavett on The Drive with Steve Jaxon 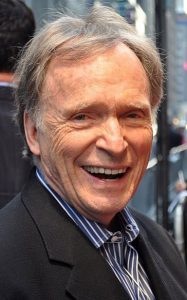 Dick Cavett joined Steve Jaxon on The Drive yesterday afternoon, and they talked about how Dick Cavett's career got started and what he is doing these days.

There will be a 50th Anniversary Tribute to the Dick Cavett Show with John Hodgman, Lance Bangs and Dave Hill, as part of Sketchfest, at the Marines' Memorial Theater in San Francisco, on Friday, January 12 at 7:30.

Dick Cavett describes how he left his home in Nebraska for Yale and then ended up in New York and his first show was a daytime show on ABC. Then he went to the evenings when Joey Bishop left the network, then to PBS, then he describes other stops, saying, "As soon as you get settled, they move you."

Steve Jaxon mentions that Dick Cavett has interviewed Salvador Dalí, Groucho Marx, Katherine Hepburn, Judy Garland, Marlon Brandon, John Lennon and Yoko Ono, and for both of them, the experience of seeing Tom Hanks in Forrest Gump, superimposed onto the film of the Dick Cavett Show with John and Yoko, was amazing.

Steve asks Dick how he got started, and he remarks that from Nebraska he went to Yale, then in New York he wrote a monolog and handed it to Jack Parr who liked it and hired him. Dick says he was lucky, to start as a writer for Parr. He notes, however, that he began as a talent booker. "They didn't have an opening on the writer's staff, so I got to talk to guests and get to know them. That was great fun, but writing was more status and certainly more money."

Steve asks, "You did start the ABC show first and then wound up at PBS. What would you consider the differences?"

Dick: "You had less hassle on PBS. I kind of enjoyed trouble and whenever you had it on ABC it ended up being entertaining. No commercial breaks on PBS, but essentially all television seems the same to me, my kind, at least, you just sit and talk to somebody until it's time to go home."

Steve: "I don't know if I could do this show three hours a day for nine years without taking breaks.  So what are you doing these days, besides being honored and stuff? I know you've written books, you do a lot of stuff."

Dick: "I keep being in people's documentaries. Every time I turn around somebody dies and they'll do a documentary and it will be someone I had on my show. And also, I shouldn't confess this, but every so often I watch myself on Decades. The Decades channel has been running some of my old shows five days a week.  (Yeah, I've been watching some of that. )  And it's a strange feeling to be sitting there with someone you knew decades ago, and they're dead. So it gives you a different attitude in watching yourself talk to them than if you knew they were alive. A lot of them are dead. I guess chronologically that happens. I was sort of early thirties, and many of my guests were of course in their fifties and sixties and seventies even, and probably some eighties, so a lot of those get lopped off by father time."

Steve: "I hope you can talk about this, I believe you've been quoted as saying it was the worst show of your life, of your career. It was John Cassavetes and Peter Falk. Dick: "They were all drunk. What an elegant friend of mine called "shifassed" They decided to be hilarious by falling down and pulling each other's shoes off and smelling their feet. I really got sick of it. It was mostly disbelief. At one point I turned to the audience and said, "This is why I never joined a fraternity. The thing that really struck me, not as a joke, was that in those same chairs, one week earlier, were Alfred Luntz, Lynne Fontaine and Noel Coward. They were so embarrassed when they would run into me on the street. The worst part of it for them, was their director or PR man gave them a brutal tongue lashing, saying if anyone was going to buy tickets to that film, they won't now."

This Sketchfest tribute is celebrating the 50th anniversary of the Dick Cavett Show. "I'll be telling stories, reminiscing and shock the audience with obscene tales from show business. Whatever we come up with is what they're going to get."

Steve: "You interviewed Spiro Agnew, and I've read it's another of your least favorite interviews."  Dick: "It was the beginning of the campaign and he was new on the scene. We put up cartoons of him. Each one I referred to, he had nothing to say about it."

Steve invites Dick Cavett back on the show, and Dick Cavett agrees he'll come back on, and Steve says, "That's a career highlight for the kid here."